Central to ETP Ion Detect technology is its ability to accurately model ion/electron trajectories and determine the influence of magnetic and electrical fields inside a mass spectrometer and particularly the detector region. Software written by ETP Ion Detect is used in these simulations and analysis. It can be methodically configured to accurately simulate secondary electron characteristics in minute configuration changes. The simulation software has evolved over 20 plus years to accommodate the evolution of instruments, materials and engineering design. For speed and resolution, state-of-the supercomputers are used to process the intensive simulations. 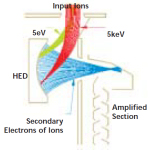 The large-area HED illustrated can capture input ions with a very wide range of input energy. The green lines represent the path of ions with low energy (5eV) which are focussed onto the upper part of the HED. The red lines represent input ions with higher energies (5keV) which are also focussed onto the bowl of the HED, but further down. The shape of the bowl of the HED is carefully designed to focus all secondary particles emitted from anywhere on its surface to the first dynode of the amplifying part of the detector (blue lines).  The resulting HED is not a simple geometric shape, but a series of concentric surfaces, each optimized to efficiently focus the emitted secondary particles onto the first dynode of the detector. 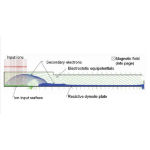 The electron optics of the detector is similar in concept to ETP’s other magnetic TOF detectors. Input ions generate secondary electrons as a result of striking the ion input surface. These secondary electrons are electro statically attracted up but deflected to the right by a magnetic field which is oriented into the page. By increasing the magnetic field strength from left to right, the electron “hop distance” is decreased, enabling a large number of multiplication stages in a short distance.